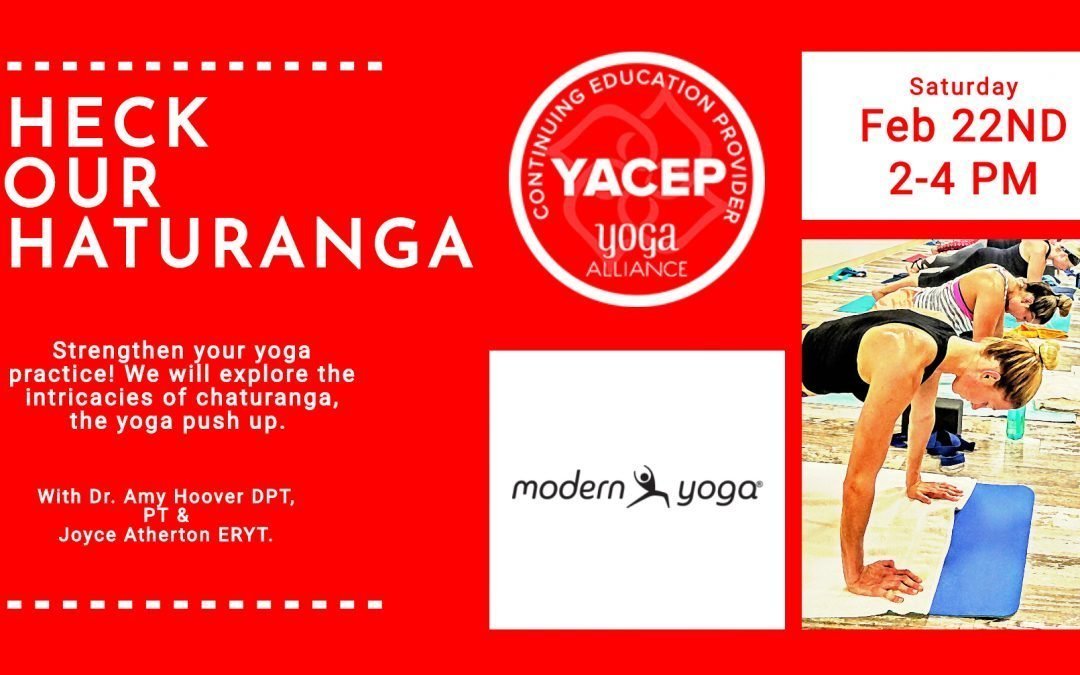 Join us in a study of the yoga push up. Strengthen your practice by understanding the elusive chaturanga, an important foundational pose and yet one of the hardest to master on the mat. We will look at correct and incorrect alignment and the corresponding positive and negative effects on posture. Chaturanga is a primary transition in power yoga and, when practiced correctly, can prepare the body for arm balances and inversions. We will show you how.

Bring your ideas and an open mind and be prepared to play! You will leave this workshop practicing high to low push up with clarity and ease.

Join Amy & Joyce!
Save $10 with online registration!
Please RSVP to guarantee your space! Dr. Amy Hoover is a physical therapist  specializes in pelvic floor disorders, including pre/postnatal rehabilitation. She has been working with the postpartum population for over 13 years. She lives in Medina with her husband and two children, two dogs and two horses.
Amy graduated from Ohio University in 1998 with a BA in Pre-Physical Therapy. She attended graduate school near Chicago at Rosalind Franklin University and graduated with a doctorate in physical therapy (DPT) in 2002. Since then she has worked in the outpatient orthopedic physical therapy setting, including both private practice and hospital/health system based. Early on in her career, she focused her continuing education on manual therapy and women's health related courses. She participated in a mentoring based training program for pelvic floor physical therapy and has been practicing this since 2004. She also helped to start a physical therapy practice within a large Ob/Gyn practice in Chicago, where she continued her specialization in women's health and pelvic floor.  Amy is also an avid Yogi!

Joyce is an EYRT with over 3000 hours of yoga teaching experience who loves to share her love for movement. After 30 years of figure skating, she made an easy and logical transition to her yoga mat. A forever student herself, Joyce wants to help yoga students see and explore endless opportunities in their practice. . . Learn more about Joyce.