From Bound Angle Pose to Butterfly Pose: the many shades of Baddha Konasana 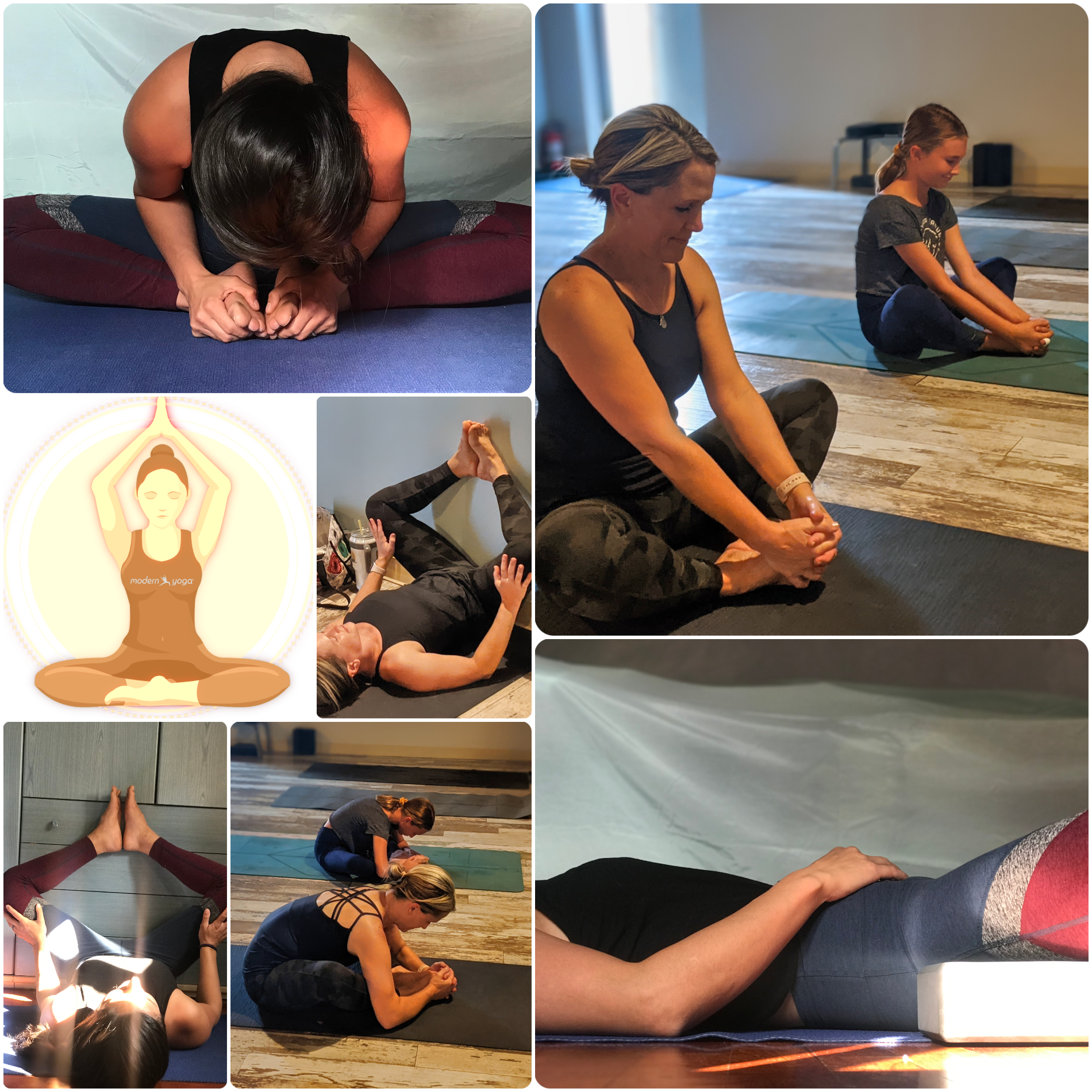 Chances are that you have tried Bound Angle Pose, also known as Butterfly Pose, at least once, whether it was at PE in High School or the yoga studio. Each yoga style offers a variation of this pose, and every teacher has their favorite way to bring it to the students!

Which one is the correct approach? If you ask an Ashtanga teacher, she will tell you Baddha Konasana with the feet as close as possible to your pelvis, and the soles open as you would with a book (typical cue for this pose) to ground the knees. A completely different answer will come from a Yin teacher, who will tell you to keep a comfortable distance between your pelvis and your feet and let gravity do the work rather than the muscles. In Yin, it doesn’t matter if the knees touch the ground. Some teachers allow students to recline; some suggest using a bolster or placing the feet in butterfly on the wall; others cue them to keep the spine straight and engage the muscles; others won’t.

So which one is the right pose? As my teacher would say: “All of them, none of them, it depends.”

Each variation of the Butterfly pose stretches the inner thighs and the entire hip complex, but each variation will add or remove an additional target area. Let’s discover the most common ones and the intentions behind them: 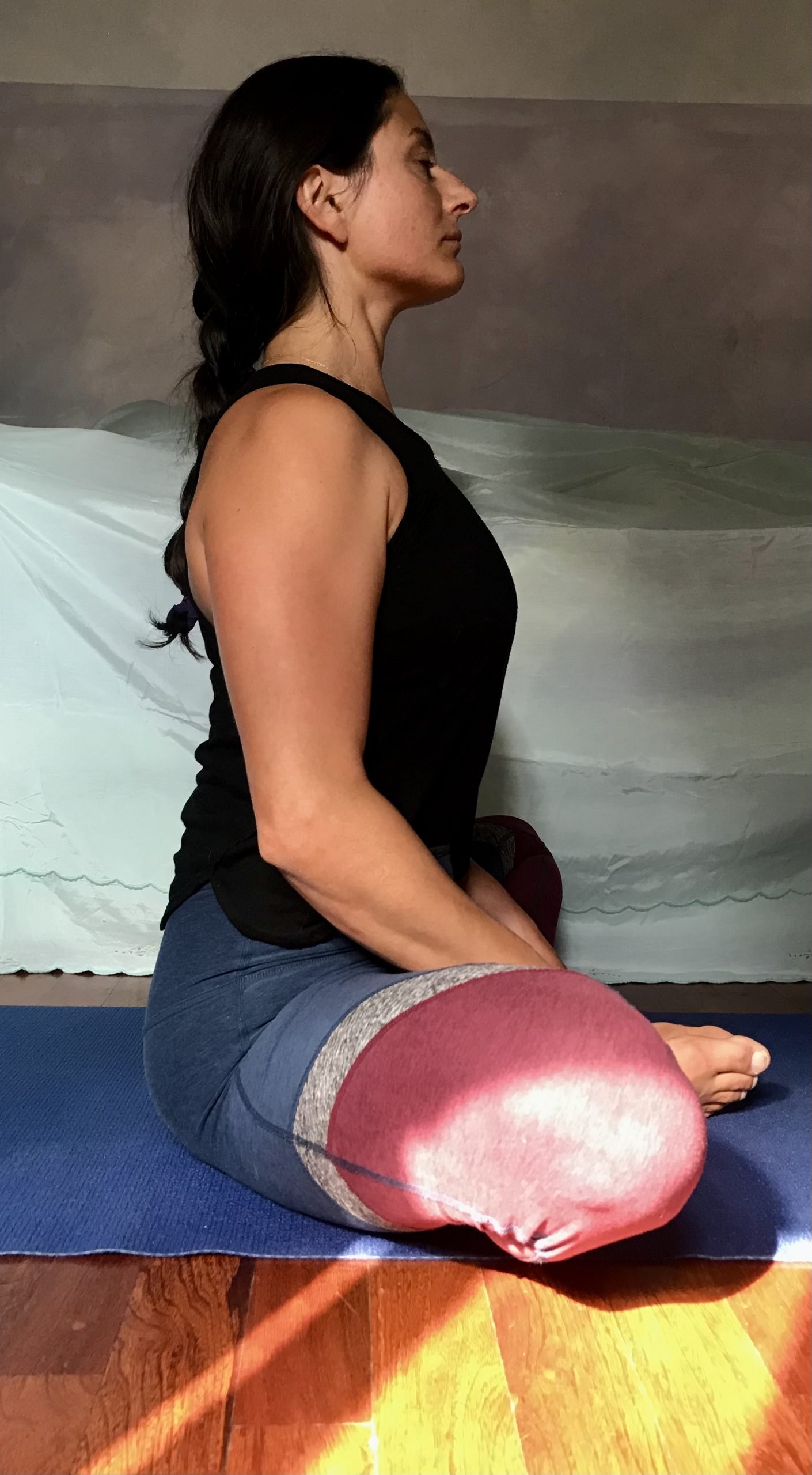 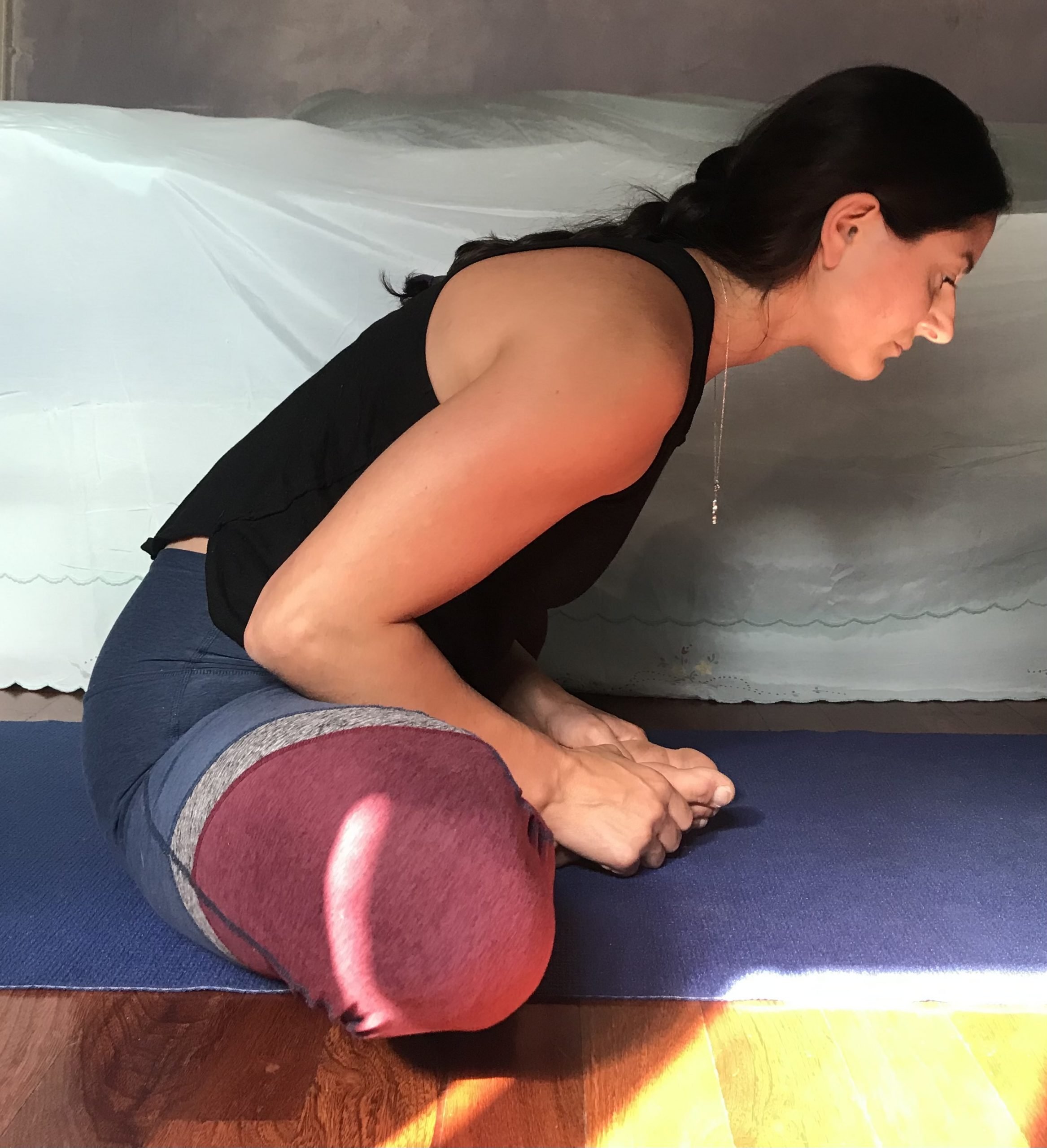 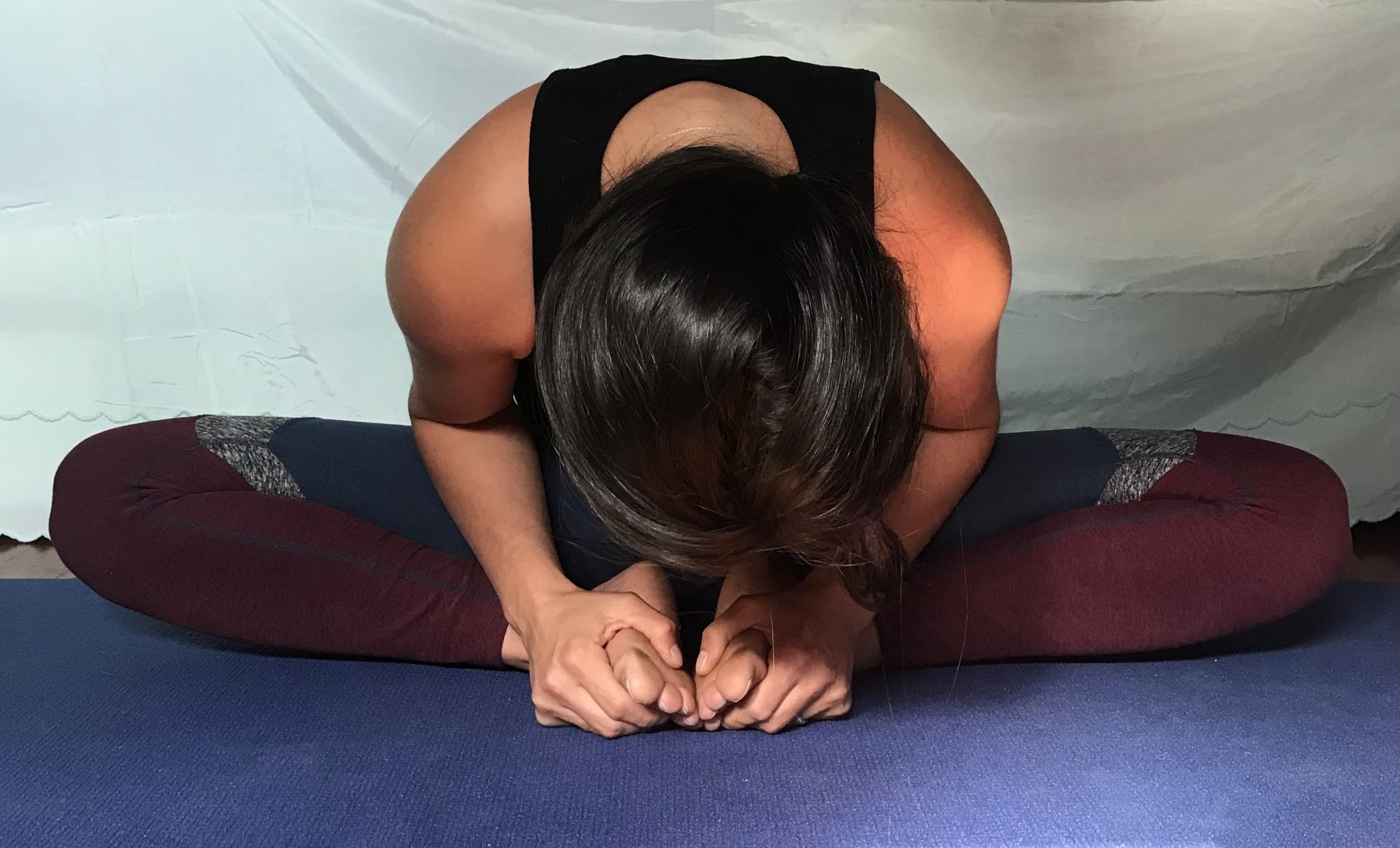 Baddha Konasana is the twenty-fourth pose of the primary series of Ashtanga yoga. It has three variations: upright, folded, and flexed. In the ‘A’ Variation, the students work on getting the knees towards the ground; ‘B’ & ‘C’ emphasizes the full range of motion of the pelvis, and the knees reaching the down is of lesser concern.

In all variations, the first action of the femur is one of external rotation, rather than simply pressing straight down. The practitioner actively rolls the thighs back towards the sacrum. Each pose is traditionally held for five breaths.

In Baddha Konasana A’s first form, bring the feet to touch, and grasp the feet with the hands, allowing the knees to close completely. Draw the heels as close to the hips as possible. The hands turn the soles of the feet upwards. The hands and arms also tug gently on the feet, pulling the heart through the arms.

The heels will need to be a couple of inches from the pelvis for the knees to come to the ground; if the femur can’t externally rotate enough, pushing the knees down generates a twisting force in the knee, which will provoke an injury. Therefore, if your feet do not touch the pelvis, instead focus on bringing the feet closer to the body as you do. The knees will come towards the ground.

For the B’ Variation, distance the feet 4-6 inches from the pelvis. The focus shifts away from grounding the knees on the floor.
Fold forward as much as the body allows without slumping. Rather than focusing on head-to-ground, focus on bringing the heart forward so that the sternum touches the knees. After you work through muscle tightness and scar tissues, the external rotation of the femur in the acetabulum’s socket will determine your maximum range of motion and whether you will ever reach the ground with your chin. The author of this article, for example, has a limited external rotation that doesn’t allow her to do it, and she came to peace with it.

Sit up again, tug on the feet following the B variation: fold forward with your back deeply rounded. This is the C’ variation.

Bound Angle Pose in a Hatha or Vinyasa class

Ashtanga is a rigorous sequence, always practiced in the same manner with little space for variations. This pose is practiced in Hatha and Vinyasa classes as well. While the feet are together to release the hips, the upper body can move and stretch in different directions. The spine needs to be upright; if not, use a cushion. Start with a twist. Place your right hand on the outside of the tight, the left hand behind you. Stay up on the fingertips so that the back keeps straight, do the other side. Place the right hand next to you, lift the left one, extend the rib cage, and lean to the right for side extensions. Remember to roll the right shoulder back a bit. Other side. 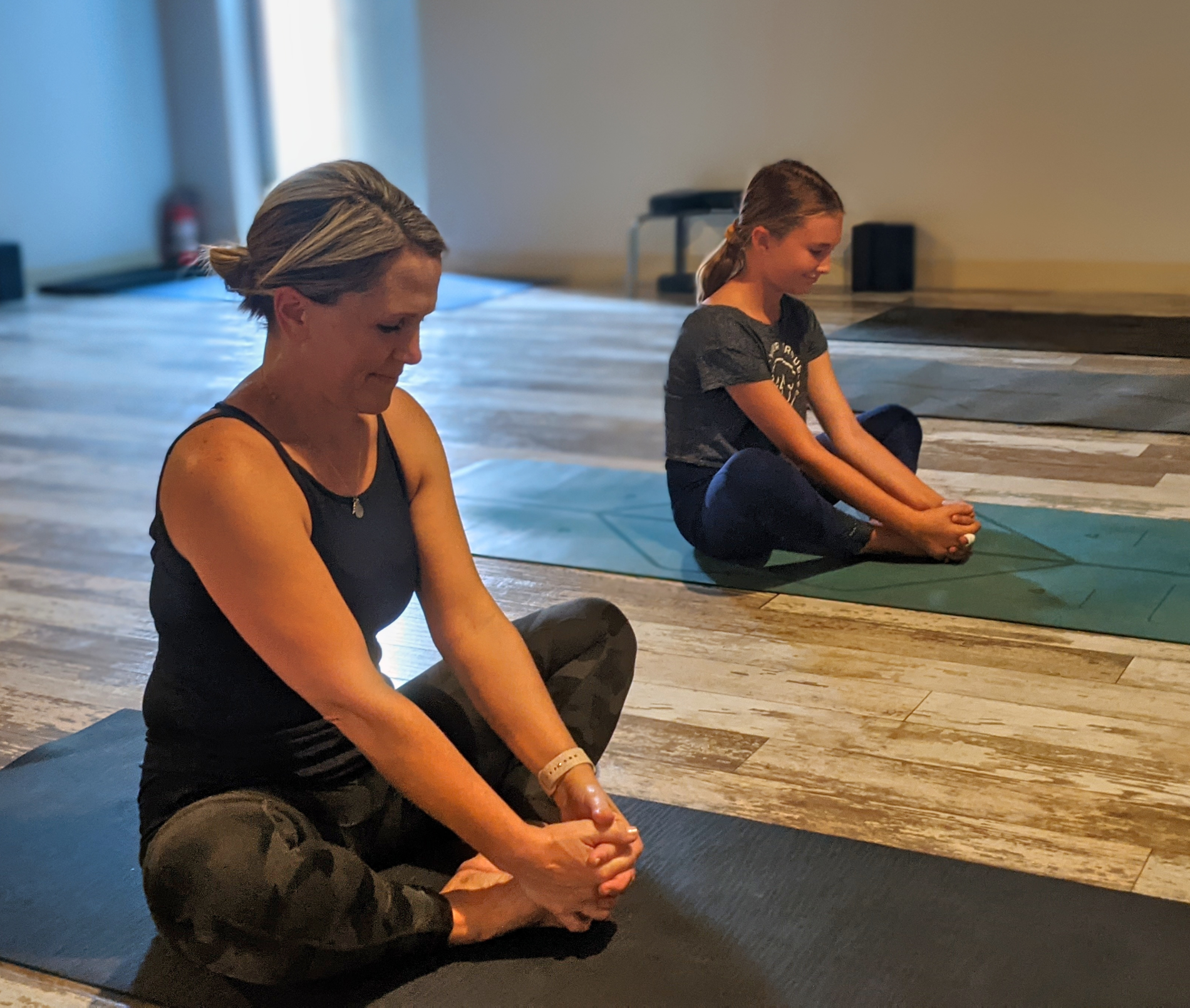 Other movements can be done while in butterfly pose: eagle arms, cat & cow, and chest openers. If you have tried other funky additions, comment on them below.

The butterfly pose is one of the most accessible forward folds in the yin yoga practice. It’s a great pose to create a space in the back, hips, and adductors (inner leg).

People that are limited in other forward folds because of tight hamstrings can still stretch their back, and it’s a great option during pregnancy because it offers space for the belly.

Bring the feet together at a comfortable distance away from your pelvis from a seated position. Fold forward from the hips, allowing the spine to naturally round. The legs and spine relax completely. In Yin, gravity works with the bodyweight to stretch the body; the practice does not involve muscles. This is because Yin targets different tissues – ligaments, bones, and joints – whereas traditional Yang practice focuses on lengthening and strengthening muscles. Props – blocks, belts, bolsters – are used to prevent the body from going too deep into the stretch.

In yin, look for that sensation of sweet discomfort: not too much, not too little. If you experience tight hamstrings or a tight low back, elevate the sitting bones. You may also want to place a cushion outside the knees for support. You can allow the neck to hang unless it creates tension, in that case support the head with your hands, blocks, or a bolster.

This pose is held for 3 to 5 minutes. Eventually, students will resolve in complete stillness for up to 20 minutes. After a long hold, it is normal to feel fragile.

Come out of the pose gently, using your hands to push the floor away and allow your spine to unroll slowly. Help the knees and straighten your legs, lean back to release your hips. Let the body settle in this seated position before taking a windshield wiper-like action with your legs and knees. 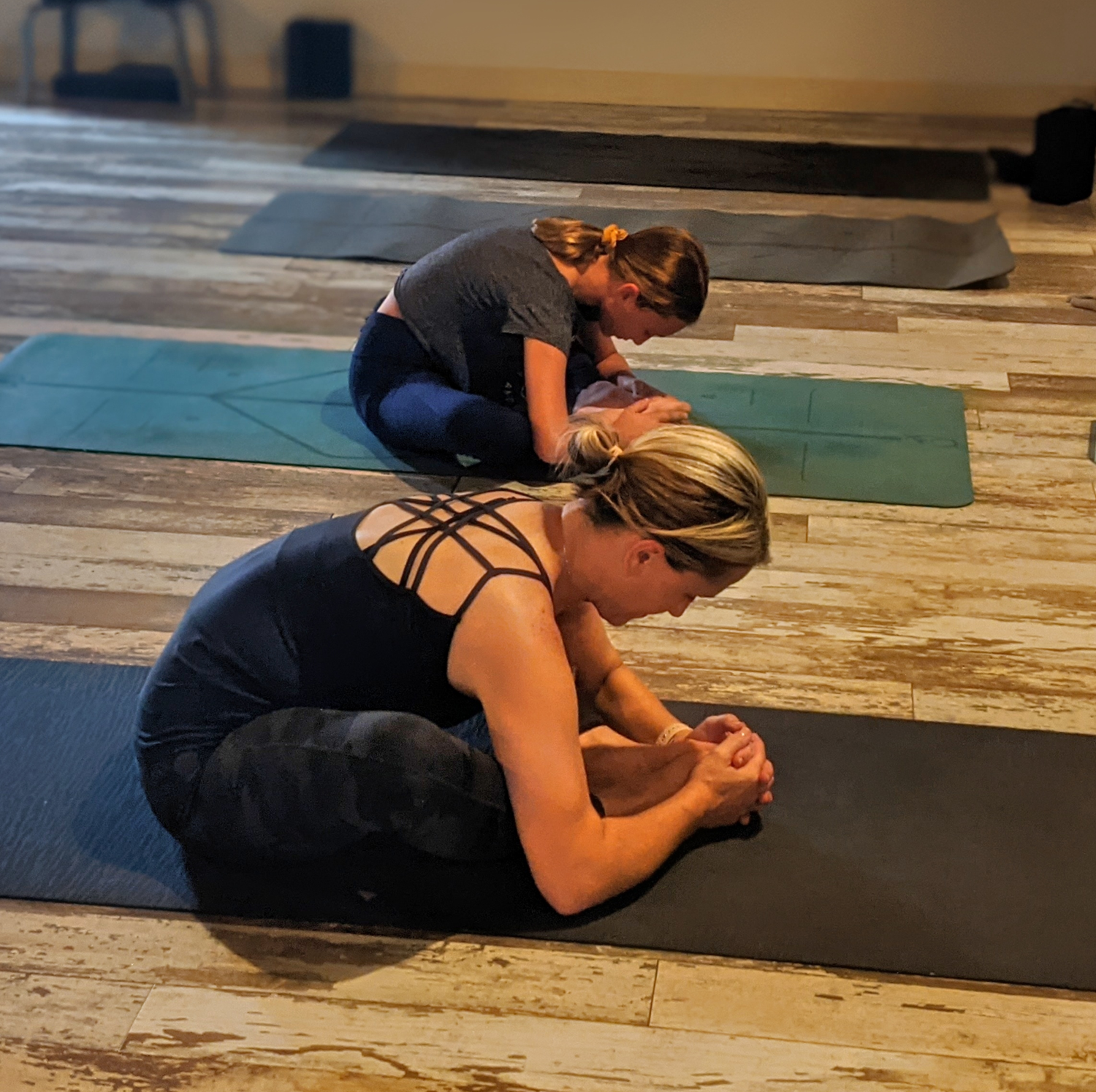 Half butterfly pose is a variation with one leg bent and the foot placed along the inner thigh of the opposite extended leg. The torso slightly twists towards the extended leg. This pose too helps open the back, hips, and inner leg. Depending on what you are practicing, you can turn it yin-like and hold it longer or you can stay for a few breaths. I like to place my hand outside the extended leg and twist even further.

You can fold forward and round the spine or keep the spine straight. If you suffer from kyphosis, keep the back upright. If you choose to round forward, leave space in and around the diaphragm.

If you’re avoiding forward folding for any reason, you can practice different variations laying on your back or legs up a wall that will still open the backs of the legs without involving the back.

The reclined variation of Bound Angle Pose, too, has its share of benefits. It still stretches the groins and inner thighs, and it can become a very meditative pose.

Supta Baddha Konasana is a great way to open a yoga practice: one hand on the chest and one on the belly, bring the attention to the breath’s rising and falling movement. Students often experience that their legs are stiff at the beginning of the practice, and holding the pose for a few minutes can become too uncomfortable for the mind to relax. Resting the outer tights on two blocks will ease the stretch. An alternative is to press the feet together gently: the activation of the adductors will relieve the excess, and you’ll be able to bring the focus back to the breath.

I invite you to play with the distance between your pelvis and your feet to find what you like the most. 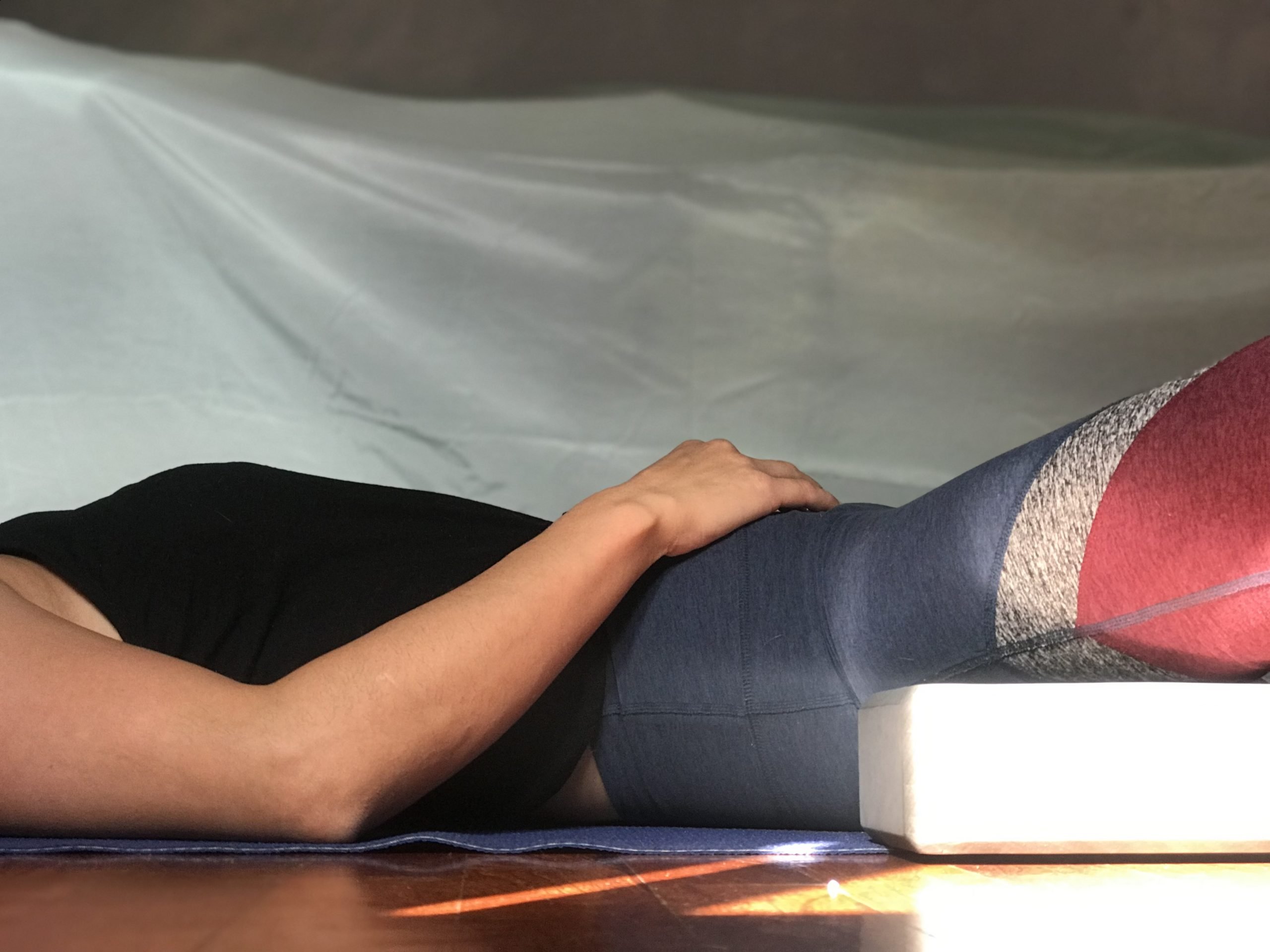 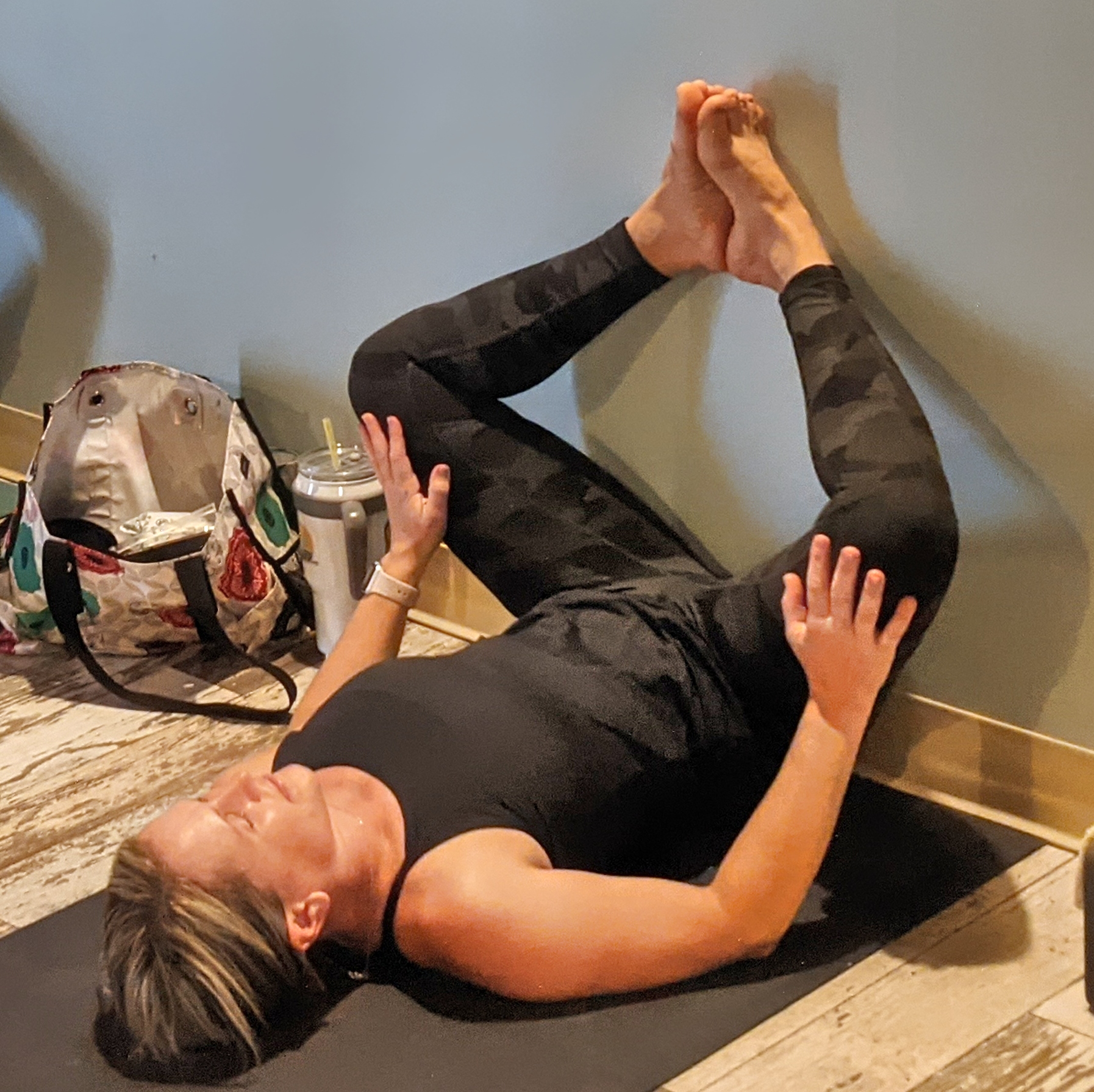 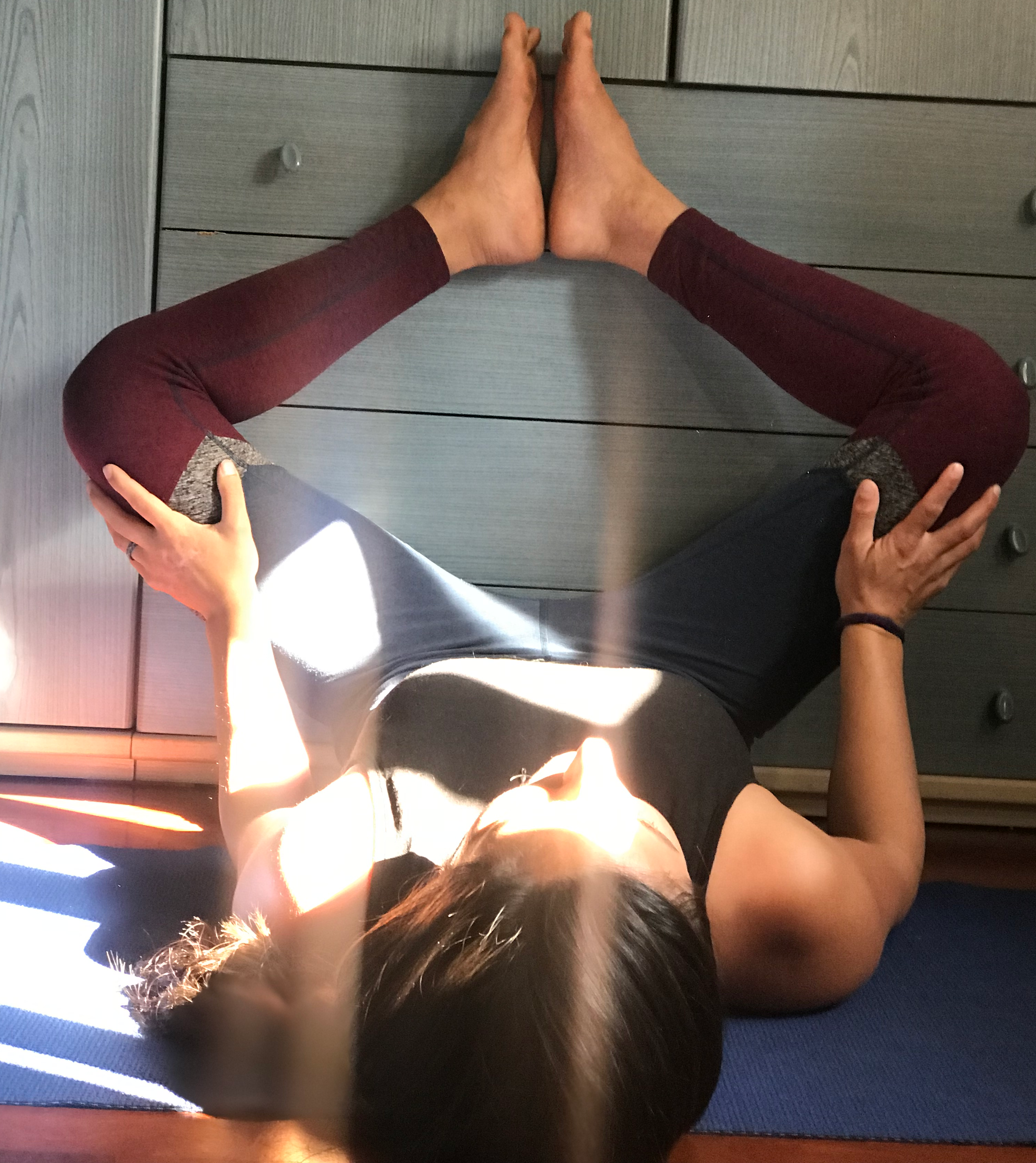 Baddha Konasana Variation Wall is another variation that doesn’t involve the spine and it is often practiced in Restorative and Yin Yoga. The practice of yoga poses using the wall as a prop helps new students gain better awareness of their body and confidence with the practice and is accessible for people with tight hamstrings and lower back issues. But everyone will benefit from postures that allow the mind and the body to relax, relieving stress and tension.

Place the feet on the wall, move the knees apart. Bring the soles of the feet to touch. Depending upon your intention for the practice, butterfly pose and its many shades will offer you a variation.